Timeline of "Artdocfest" in Russia. April 2021 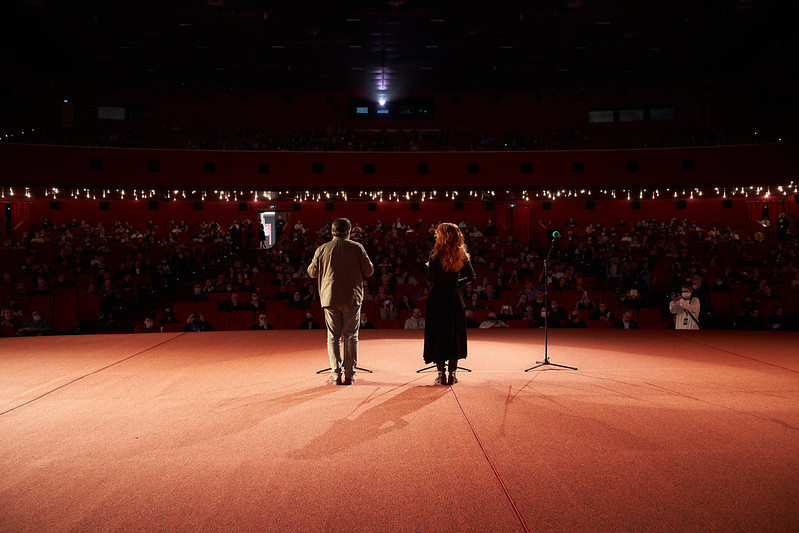 April 2, Friday – the "Artdocfest" festival opens in the large hall of the "Oktyabr" cinema in Moscow with the film "Rastorguyev" by Evgenia Ostanina. Many famous figures of the Russian film industry come to the opening: directors Mikhail Segal, Vladimir Kott, Alexey Fedorchenko, Alexey Uchitel; producers Alexander Rodnyansky, Elena Glikman; politician Ilya Yashin, and friends and colleagues of Alexander Rastorguyev from the projects "The Term" and "Signs of Life".

April 3, Saturday - the first working day of the festival in Moscow. In the morning, the radical SERB group disrupts the screening of the film "Birthmark" at the "Oktyabr" cinema. In their social networks, they urge to attack the festival. SERB group describes the film as anti-Russian because of the film authors' viewpoint on the issue of Crimea - in the annotation, the film authors call Crimea an occupied territory, however, the word “occupation” is never heard in the film.

Police and "Rospotrebnadzor" come to the opening of the "Artdocfest" in Saint Petersburg to the "Dom Kino" cinema, during the screening they are restrained by the festival team and "Rastorguev's" producer Evgeny Gindilis, not letting them to the screening hall. Immediately after the screening of the film, representatives of the authorities sealed both halls of the "Dom Kino", in which the festival screenings are to take place, thereby depriving the "Artdocfest" of the central location. Under the obviously far-fetched pretext of incompliance with the sanitary standards, as well as the propaganda of homosexuality among minors. Police and "Rospotrebnadzor" also come to the second location of the "Artdocfest" in Saint Petersburg - the "Lendok" studio.

April 4, Sunday - In Saint Petersburg, the "Lendok" studio, without waiting for an official ban, announces its decision to cancel the “Artdocfest” screenings to avoid provocations and the closing of the cultural center. The festival team, journalists, and viewers come to the "Lendok", trying to defend the site, but they fail. Director Viktor Kosakovsky is recording a video in support of the festival.

At the same time a representative of the Chechen diaspora comes to the "Oktyabr" cinema in Moscow with a request to remove from the screenings the film “Silent Voice” about a Chechen gay who fled to Europe after being persecuted. The man who introduced himself as Suliman says that the film offends the Chechen people. He received an explanation that it's impossible to change the program, and he leaves, making it clear that other levers of pressure will be involved, and the film will not be shown one way or another.

Monday 5 April - A decision is made to put the film "Birthmark" online. In the afternoon the screening of the film "Silent Voice" by Reka Valerik is canceled "on-call" - the organizers are forced to do this under serious pressure and replace it with another film about the deep conflict of consciousness of a modern Russian people - "Immortal". The director of the "Silent Voice" appeals to the audience of the film, which they will not see, and to those who promote a complete ban on the film, wishing everyone love. It becomes obvious that no one will be able to show this film in Russia.

April 6, Tuesday - In Saint Petersburg, director Alexander Sokurov appeals first to the city authorities and then to the "Lenfilm" with a request to "shelter" the disgraced "Artdocfest" festival and receives a polite refusal. The festival team negotiates with the copyright holders of 25 (out of 36) films from the Saint Petersburg program about transferring screenings online.

In Moscow, the SERB group demands, without going into details, to cancel the screening of the anti-militarist film "Summerwar" about a summer camp in which children are taught the art of war. The festival, in agreement with the cinema managers, decides to postpone the screening to ensure the safety of the children's event taking place nearby. The critic Alexander Arkhangelsky, the director Roman Balayan, the artist Andrei Bilzho, the art critic Marat Gelman, the writer Boris Minaev, the journalist Zhanna Nemtsova, the general director of "Meduza" Galina Timchenko, the musician Vasya Oblomov, and the journalist Svetlana Sorokina reached out in support of "Artdocfest".

April 7, Wednesday - under the requirements of Russian legislation, the film "Doazuv (Border)" by Maryana Kalmykova is screened online due to the refusal of the Ministry of Culture to provide the film with a distribution certificate. "Artdocfest" is supported by the art critic Zara Abdullaeva, the artist Pavel Kaplevich, the actress Tatyana Drubich, the director Alexander Mitta, the animator Harry Bardin, "KinoSoyuz", and the Documentary Film and Television Guild.  SERB group comes to the festival and tries to disrupt the screening of the film "Way Home", presenting the value judgments of the film characters as the opinions of the organizers of the festival. They intend to splash paint on the screen, but the police and the cinema guards prevent vandalism and escort the provocateurs out of the cinema. Members of the SERB group in their social networks write that attacks on the festival will continue.

April 8, Thursday - threats continue to come to the organizers of the festival, however, the screenings in Moscow are held as planned.

April 9, Friday - the last day of the festival in Moscow. The SERB group comes to the festival with cameras to arrange a "performance", during which it makes a physical attack on Vitaly Mansky. The leader of the provocateurs, Tarasevich, grabs Mansky's head and face with a cloth, throwing himself from behind. The scuffle ends up with the attackers pushed back without the participation of the police (which does not show up). Nevertheless, the attackers are satisfied and leave the building. The festival closes in triumph with Vera Krichevskaya's film "F@ck this Job".

100 films and 115 screenings were shown, the festival was attended by more than 12,000 viewers. More than 5000 viewers watched the films for a fee and for free on the ArtdocMedia platform.