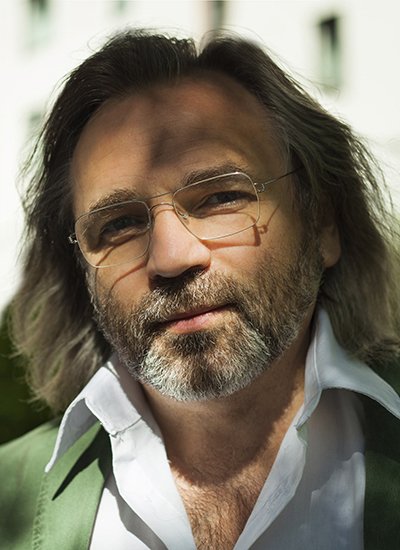 “Once you open your eyes and get a sight of the world, you will want to look again and again. You will like this feeling. After a while, you start to feel it, smell it. You sense where this time would be best to put the camera. When you put it in the right place, things start to happen. Intuition is a part of the magic. Suddenly you see something! There are others around who appear to see the same thing as you, even though they don't actually see it. But I can frame the scene so they could see it too. It is magic, complete happiness. The guys who have been by my side the whole time look at my frame and say: Oh! Why didn't I see it? Yet we were all there together. The only way for me to be happy is to shoot films. I'm happy while I'm filming. I look through the camera and realize that now I'm the only one who sees it...”

This way, Viktor Kossakovsky — a documentary filmmaker whose name is well-known among admirers of high-class cinema, describes his work. However, the Latvian audience may not be familiar with his work because still, his films in Latvia were almost unavailable to a wide audience. Kossakovsky's films are lucky enough to see those who attend major international film festivals, where all of the director's films are much expected.

Kossakovsky is a film innovator. His filmography covers a wide range of themes, but he has always emphasized that the subject of the film is not the most important thing. The story behind is not the main thing either. On the contrary, he is an opponent of cinema storytelling, because what can be told is better be told or written and not made into a film.

For Kossakovsky, it is essential to create and show something unique in films, something no one has ever seen before or chooses not to see.

The previous director's masterpiece Aquarela introduced viewers through a dizzying cinematic journey to the world of water beauty and its tough force. Aquarela is a breathtaking film not only because of the visual, acoustic, and magical elements, but because this film acted as a sharp wake-up call that reminded humanity of its inability to compete with the force of nature.

"I think that we made a mistake at the very beginning," says the director about his latest film Gunda. "This mistake begins from the first page of the Bible. First, God created light, darkness, then earth, air, animals, plants, and, finally, people to rule it all. I think there is a mistake here. I think we can't rule it all. I don't think that we are the most important, most sensible, or most beautiful. I wonder why we do anything we want with others. Not only do we invent the Novichok, the nuclear bomb, the Kalashnikov; we kill every day and pretend we don't know anything about it. I understand that I cannot change the world. I cannot convince even the wisest, most educated, most talented people I am fortunate enough to know not to eat meat. The only thing I can do is apologize to the animals. And I do it with this film."

Philosopher Uldis Tirons will talk to Viktor Kossakovsky at the open session of the Artdocfest/Riga Symposium.